GOOD is a well-known periodical from the United States launched in 2006 and published in two different formats, both paper, and internet. The magazine gives broad information on several topics like lifestyle, environment, education, business, politics and more. As part of the GOOD Magazine’s Transparency series, they launched a contest in March 2010 about the new health care bill approved by the U.S. government.

The objective was to create an infographic explaining the health care reform based on existing research and relevant topics like whom the reform will benefit and whether it will save or waste money. Suggested data sources were the New York Times, the Washington Post, CBS, and the U.S. Government.

Healthcare in the United States is intransparent and overly complicated: There are so many different kinds of medical coverage that, before the reform, people were easily overwhelmed by legal ramifications and missed out on services they were entitled to have. This presented an interesting opportunity for us to apply our experience as designers, and to visualize this interesting dataset from a citizen’s point of view in order to see which changes the reform would bring.

We started with splitting all the U.S. citizens into two groups: those who will and those who won’t be affected by the reform. In doing so, we realized that the reform will affect most of the citizens by 2014 – the real turning point – and we decided to split them into uninsured and insured. Apart from controversies over the reform during the period of congress approval, many different sources prove that a large number of people in the U.S. are currently uninsured: around 90 million non-elderly people, according to the Census Bureau. 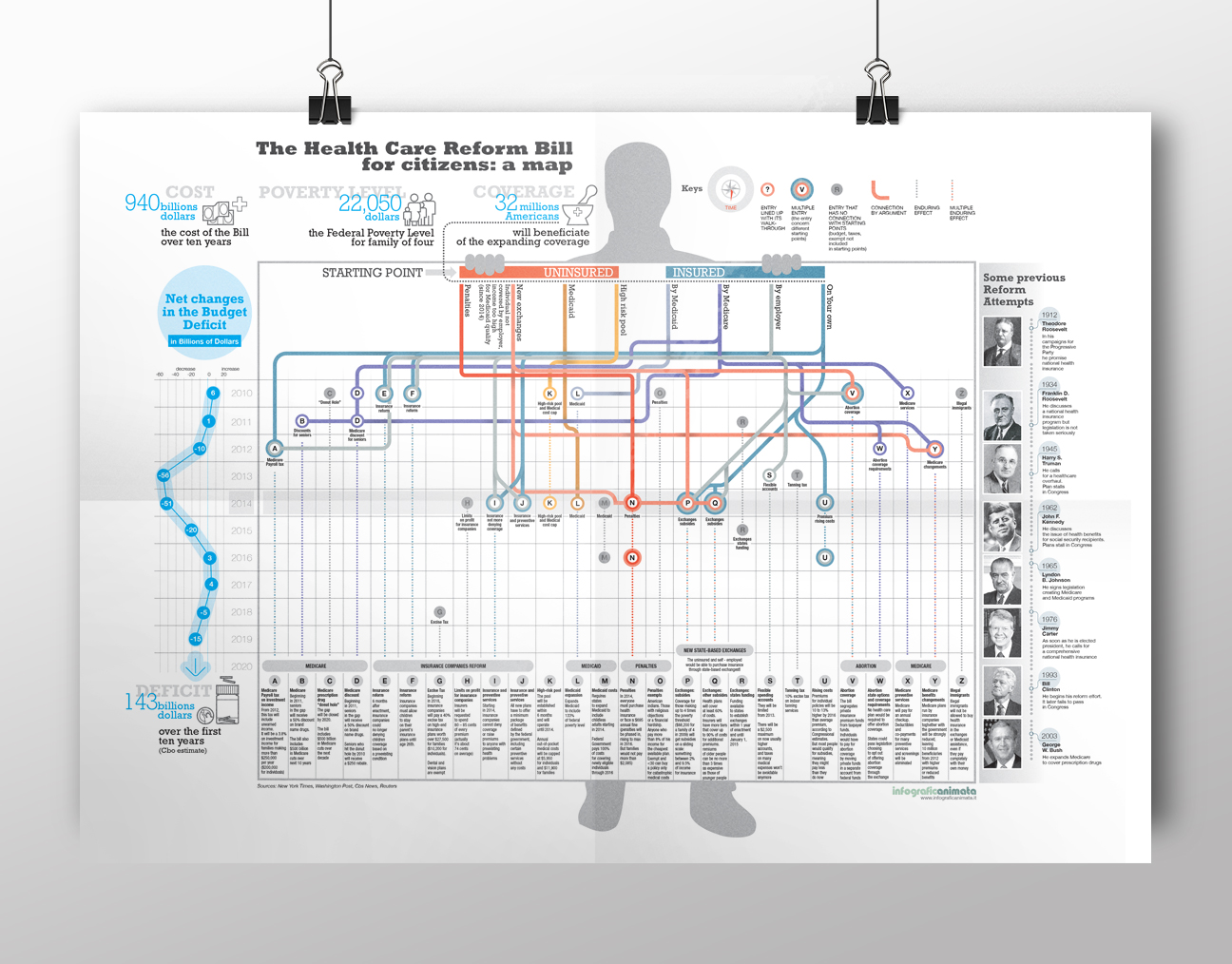 We focused on the various kinds of insurance and split all the insured people into four categories: 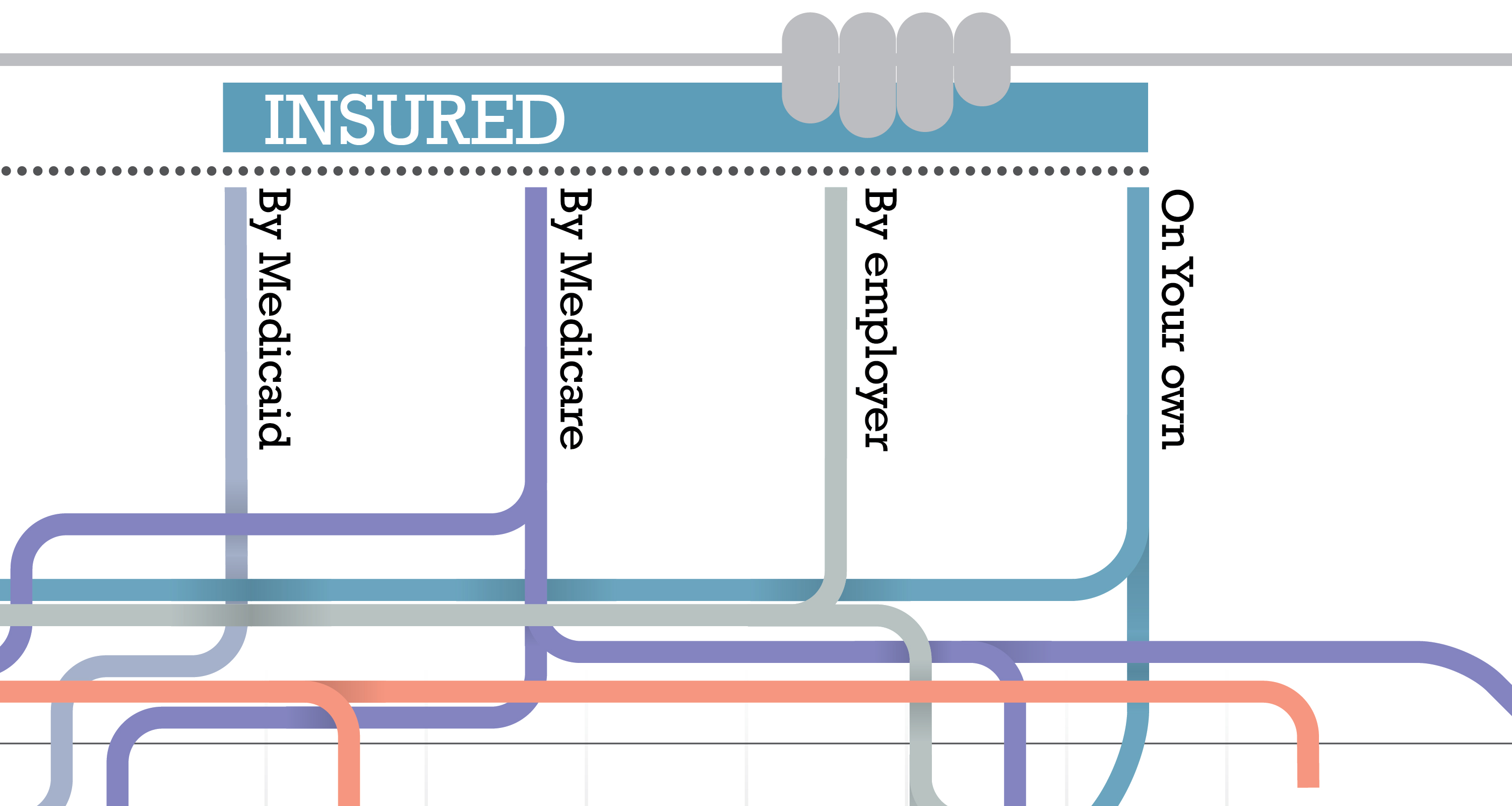 At that time, Medicare and Medicaid were supporting a large amount of poor and elderly people by providing them with therapy and health programs, supervision and personal assistance. But analyzing the numbers concerning this huge population stratum would miss the point, so we tried to concentrate on the more relevant part of the population: the uninsured. Because everyone should have an insurance by 2014, we moved on to focus on solutions rather than the current situation, and, in order to get a similar grouping, split all uninsured people into four categories, too: 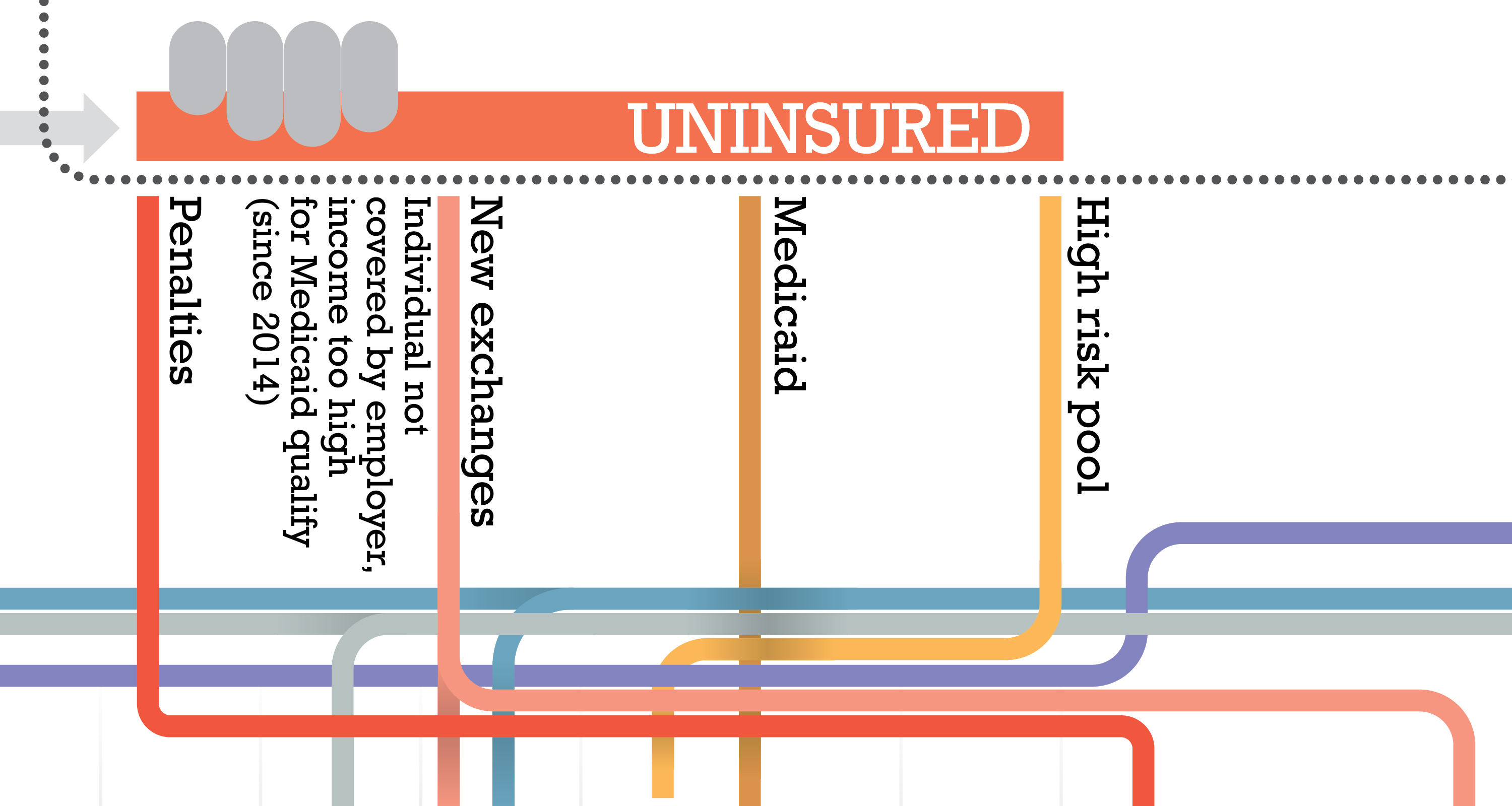 When looking for a visual representation to show the development of the health care reform over time, we opted for the subway map metaphor, grouping main categories by color. The labeled circles inside the map can be read as subway stations, stopping at milestones as they progress downwards along the ten year reform timeline. The result is a flow that shows the starting and end points for both insured and uninsured citizens (whose situation hopefully improves) and clarifies the main applications of the reform:

Using this visualization, a reader can pause at each stop and read the corresponding bill. Some entries have been included without having a connection to a starting point because of their relevance.

Connections between stations, as well as multiple stations, were shown where possible. Enduring effects represent the duration of a bill over the years (some chapters of the reform stop in 2014, while others start then).

Then we added several interesting facts and figures:

We also added a breakdown of the reform’s economic effect on the U.S. budget to clearly focus on the citizens and their future. Finally, we wanted to emphasize the fact that President Obama made health care for every American citizen a reality, something that several presidents tried but failed to achieve before him. So we added a timeline starting in 1912, showing the previous attempts. We used the historic coverage of Reuters as a source of information on this.

In the end, everything was combined into a poster, providing various levels of information.

The final infographic was published in the GOOD Magazine 2010 summer issue and in the website, and rewarded as “Best design” in the corresponding contest. 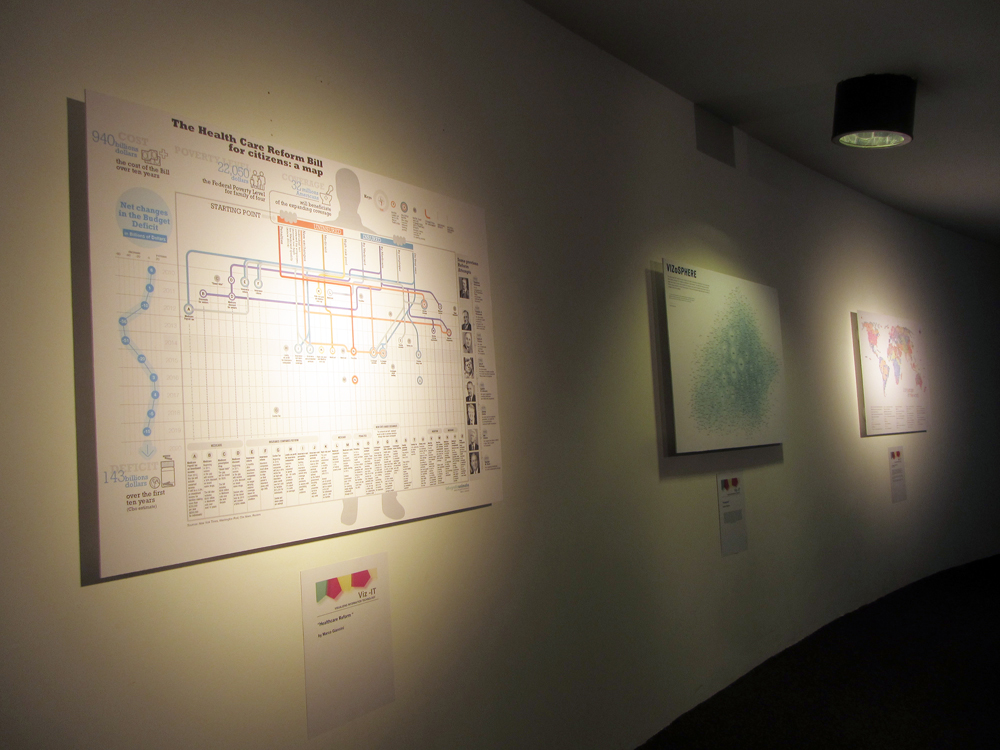 The final artwork was exposed in the Fall of 2012 in Mosi Arc Gallery in Tampa, FL (https://www.mosi.org/), together with other visual projects over the health care system in the U.S.